Greek Research Infrastructures leaders on the next steps for Open Science

Self-organizing research communities for open science: Locating Open Science (OS) at the core of European Union strategies and flagships led an increasing number of public stakeholders with an active role in the academic and research fora to embrace this new paradigm, though in a decentralised way. Developments of the European Open Science Cloud (EOSC) contribute both to accelerating this shift and to introducing a coherent approach to communicating, internally among national stakeholders, and externally with the EOSC and the European Commission. Following this evolution, Greek stakeholders came together to reflect on the national OS setting and agree on a collaboration framework which is necessary for an effective response and alignment with European practices. 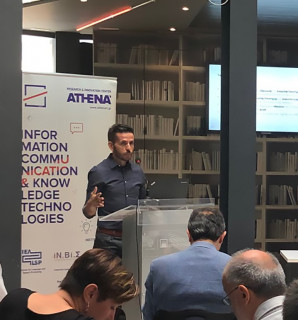 The nature of the Task Force and its objectives: The Task Force (TF) will assume a bottom-up approach for the development of a national strategy for Open Science, which will include details on three key pillars: policy - legislation - infrastructure/services. This approach will contribute to identifying challenges, coordinating activities, and implementing institutional policies for the affiliated organisations of its founding members. Οnce completed, the proposed strategy and its implementation facets will be instrumental in official national policy making decisions, aspiring to align Greece with open science and EOSC developments.

The trigger: The idea to set up a Task Force was expressed during the first Greek Open Science Symposium and is driven by the Greek academic and research community demands to better understand the national OS components already in place in order to then more effectively respond to the European developments, with most eminent being the establishment of a two-way communication with the European Open Science Cloud (EOSC). It also comes as the next step of OS activities performed by the Greek OpenAIRE NOADs and the Greek RDA Node, who have been collecting information and producing primary material to be utilised by the Task Force.

The response: Athena Research & Innovation Center called national representatives from Research Infrastructures, e-infrastructures, Academic Libraries, Universities, Research Centers and initiatives that are active in the Open Science area, with close links to European research infrastructures and leaders in their domain in the country, to participate. The majority of them accepted the invitation and adhered to commitments regarding participation to the TF. It is worth mentioning that both the General Secretariat for Research and Technology (GSRT) and the Hellenic Foundation for Research and Innovation (HFRI) attended the meeting as observers.

Setting the scene and initial targets: Presentations given by Prof. Yannis Ioannidis, President of Athena Research Center, Spiros Athanasiou, and Elli Papadopoulou, the Greek OpenAIRE NOAD, aimed at presenting existing national and European Open Science policies and developments; defining a common roadmap for the authorship and adoption of institutional Open Science policies by national bodies / organisations; and designating the members of the Task Force along with provisioned responsibilities and actions.

Composition: Specifically, the Task Force will consist of one to two representatives of each organisation, who will be contributing to the national strategy document and to the corresponding Open Science policies. Additionally, it is expected that they will be attending f2f meetings, acting as a liaison between the TF and their organisation. First set of decisions to be made by the TF concern the policy that is tied to the strategy, which focuses on five pillars:

The principles to success and milestones set: This collaborative effort is characterised by three foundational principles being located at the core of its TF conduct: 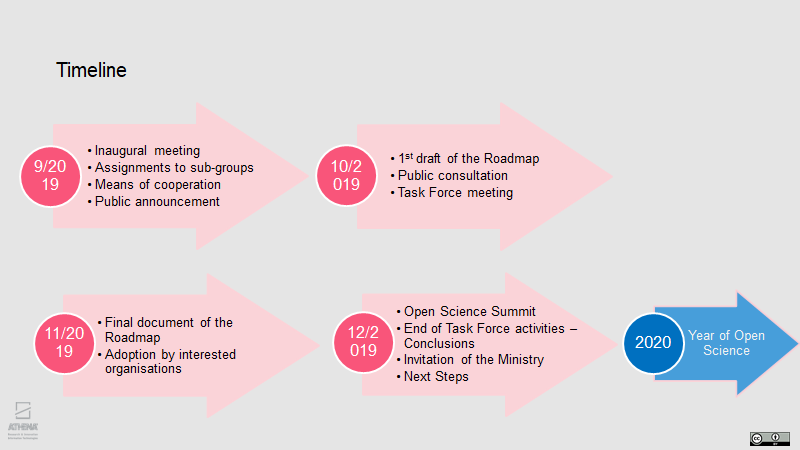 Thoughts and conversations: Throughout the meeting, fruitful discussions were held and many interesting opinions and views were expressed. Each participant informed about data peculiarities as observed within their domain of practice, which need to be taken into account and added in the corpus of the strategy so as to ensure wider applicability. A gap analysis of the Greek state-of-the-art will facilitate the process of mapping the needs of the diverse domains. Additionally, integration of rules and principles regarding infrastructures and FAIR data will increase sustainability, ensure the quality of the research results and enhance the credibility of scientific repositories. Attention should also be given to the new PSI Directive that embeds research data into its public data rules, and to the new Copyright Directive. Lastly, it was agreed that the proposed solutions should be simple and technically feasible at lower cost possible, to form an appropriate and easy to implement sustainability plan. 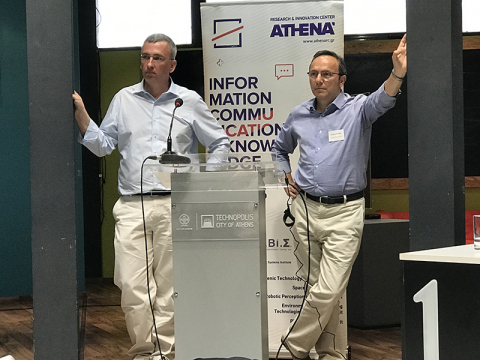