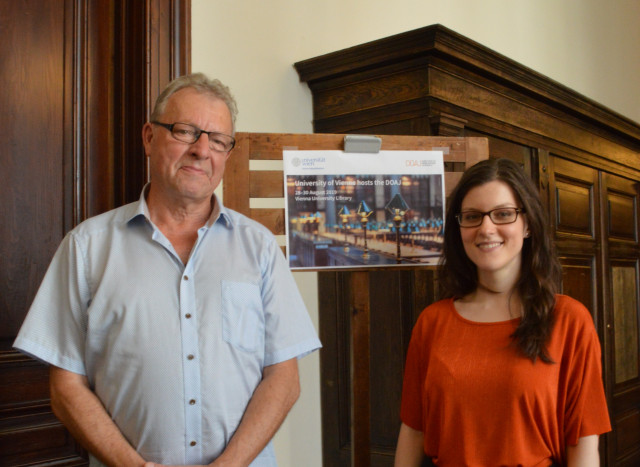 "DOAJ operates an education and outreach program across the globe, focussing on improving the quality of applications submitted."[1]

DOAJ is an independent, free of charge, online directory that indexes Open Access and peer-reviewed journals - with the help of many volunteers who are evaluating the new applied journals. It is funded 40% from sponsors and 60% from members and publisher members.

After stops in cities like Rome, Stockholm, Copenhagen and Barcelona the Directory of Open Access Journals (DOAJ) held its biannual strategy meeting late summer 2019, at the Vienna University Library (VUL). It was organized by the Austrian NOAD Gerda McNeill in cooperation with the Public Relations Department of the VUL.

That meeting gave us, OpenAIRE NOADs, the opportunity to conduct an interview with DOAJ founder and current Managing Director – Lars Bjørnshauge.

DOAJ was founded 16 years ago and developed into an integral element of Open Access journal publishing. It was a great honor to be the hosts for the DOAJ strategy meeting.

Seizing that opportunity, Mihaela Hubert, from the Austrian OpenAIRE NOAD, set down with Lars Bjørnshauge to discuss the current goals and future plans of DOAJ.

The topics discussed in this interview revolved e.g. around general information about the DOAJ, it's evaluation process and future plans.

Bjørnshauge mentioned the humble beginnings of the DOAJ in 2003 - with only around 300 journals on an Excel sheet. Now DOAJ has become THE known and trusted listing of Open Access journals (that are recognized by governments, research funders and universities). Therefore, to talk about this organization is to talk about a success story.

Today, DOAJ is not only an important indicator of quality for Open Access journals but also important for the movement towards more Open Access publishing, with over 13.000 indexed journals (and more than 35.000 evaluated), from more than 130 countries, in over 70 different languages.
The success of DOAJ stems from the many volunteers that are contributing to DOAJ by reviewing new applications for journals wishing to be indexed in ‪‎DOAJ.
Bjørnshauge also talked about their membership program where universities can donate or sponsorship programs where publishers donate money.
DOAJ is working on sustaining its quality by keeping questionable publishers - who are doing no e.g. peer review whatsoever - out of the DOAJ. And therefore DOAJ is also a tool for researchers to avoid getting involved with predatory or questionable publishers, as Bjørnshauge put it.
Responsible for and contributing to the quality is the thorough process of deciding which journals will be listed in the DOAJ. One of the steps is a detailed application form in which the publisher fills in around 50 questions about many different aspects of the journals operations: e.g. the editorial board, the peer review, the rights and licenses as well as whether they're checking for plagiarism. They are asked to provide a URL for almost every question as proof for their made statements. This then gets checked by the DOAJ staff - there are associate editors, editors (which are volunteers) and managing editors who evaluate it.
DOAJ receives on average around 600 applications per month from journals - which will take on average two to three months until the decision is made and around 60% get rejected in the end.

A major change for the future landscape of DOAJ and scientific publishing will be the transition of hybrid and subscription journals to real Open Access journals. In the coming years, DOAJ is expected to have an important role in evaluating the many new applicants, which (when aligning with Plan S) have to transition to OA journals. That would lead to around 15.000 to 20.000 more applicants for DOAJ. When the group of funders demanding real OA publications grows, then there also will be pressure on hybrid and subscription journals to make the transition into real OA publishing and through that put an end to double dipping.

Considering that APCs will then still be in place, Bjørnshauge mentioned that two-thirds of the journals in DOAJ are not charging APCs. But looking at the articles published by these journals there is the opposite figure: two-thirds of the Open Access published articles (of DOAJ-listed journals) are charging an APC - because the bigger publishers (that are based on APCs as a business model) generally publish more. In the future Bjørnshauge expects there to be further discussions (within Plan S) about when (at what prize range) to cap the APCs.

This pricing issue is also connected to the journal impact factor (JIF) and where researchers want to publish their articles. Researchers are looking more at the prestige of a journal because that promises the most rewards for them.
That is problematic, considering how the JIF number itself is calculated. Therefore, the reward system for researchers (that does not reward publication of negative results) and also the perception that a high impact factor equals high quality need to change, only this will take time as it is very much interwoven within academia.

Plans for the future

The importance of DOAJ not only lies in its service of evaluating journals that apply to it, but also the role it's expected to play in the transformative process that is: Plan S.

If everything goes as Plan S laid out, Lars Bjørnshauge estimates DOAJ to have a major role in the transformation to Open Access and sees many more applications to come in the near future of DOAJ. So instead of 13.000 current journals, there could be around 30.000. The many dedicated 'Ambassadors' and volunteers will be helping the 12 permanent staff members in handling most of the anticipated workload.

Further plans include: contributing to making scholarly communication global, reinforcing the cooperation with other regions besides North America and Europe (more so in Africa, India and Asia). And helping implement "best publishing practice" (creating standards like transparency, an editorial board, peer review) and also for instance conducting workshops as well as training editors how to run a journal.

Researchers and their data in Austria: survey results report 2015