Drafting the proposal for a National Open Science Strategy in Greece: an inter-institutional approach 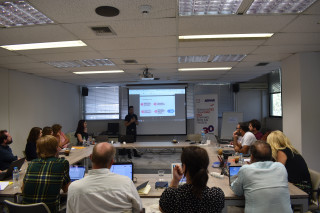 Inaugural meeting of the bottom-up Open Science Task Force: On Monday 30th September, representatives from 16 national institutions, research infrastructures, nodes and Open Science initiatives came together to discuss about the proposal of a National Open Science Strategy. Following the "Open Science in Greece: First Steps" meeting that took place in July, the Open Science Task Force (OSTF) continued/ broadened discussions in order to agree on the structure of the draft proposal (main chapter and sections) prepared by ARC and to conclude on tasks allocation for finalising the working document.

Zooming in the draft National Open Science Strategy document: The members of the OSTF joined forces to create proposal policies for the integration and implementation of Open Science principles to the national scientific environment. The Strategy adopts the principles characterising Responsible Research and Innovation and is written with a prominent focus on Open Science, but as most of the RRI principles are interdependent, it incorporates all of them in the rules and national frameworks that it proposes to achieve a more coherent outcome. It takes into consideration the recommendations of the Open Science Policy Platform as well as ongoing work in the European Open Science Cloud context, among others, and provides answers to national commitments such as those included in the Greek ERA report (Open Access to publications by default in 2025).

The main chapters of the draft National Open Science Strategy include a set of policies for open and FAIR scientific outputs and for access to national services, intended for both institutional and national adoption. The core implementation components reflect on the strategy's core principles and are categorised so that key areas are covered, from policy recommendations and the legal framework to guidelines for infrastructures and training actions. The outcome of the OSTF activities will form the basis of a national framework for Open Science including micro policies that will be adopted by most of the participating institutions. Ultimately, the proposal will be communicated to the political leadership later in the year, aspiring for central implementation by the corresponding Government Bodies. 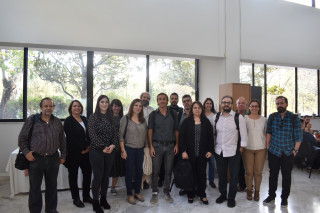 Discussions and Next Steps: Discussion between members contributed to setting the foundations of an equitable, trusted and respectful collaborative working framework. Among the things touched upon during their conversations were:

The meeting ended with all members of the OSTF volunteering on the different areas of the working document where further contribution is essential. The OSTF will meet again in October/ early November to present the material produced in the meantime.

Why it matters: The enthusiasm and team spirit pertaining the OSTF members, who agreed to work on producing a concrete and realistically implemented document that covers significant Open Science issues, promises a successful outcome of the activities.