During the International Open Access Week 2019, Austrian NOADs from the Vienna University Library (VUL) organized a campaign to promote Open Access at VUL and its department libraries. The idea was initiated within a working group of the "RepManNet Austria" (Repository Manager Network), led by Austrian NOAD Gerda McNeill.

The overall idea of the working group was to create a toolkit of different materials, from which every institution can extract the material it needs and reuse it as required.

The target group were students and the goal was to introduce them to and inform them not only generally about Open Access and Open Science but also about the OA research cycle, as well as the OA publishing options and legal aspects.

VUL's approach was to carry out a campaign from 21st to 25th of October 2019 in 28 participating department libraries as well as the Main Library (of the VUL) with support from the in-house Open Access Office and the department for Public Relations.

So the Vienna University Library decided to use the following format: to create five posters (accompanied by informational flyers as well as informational folders about OpenAIRE and other research supporting services) including QR Codes and links and a quiz that goes along with it as well as prizes for the participants of the quiz as an incentive to participate.

The five posters displayed following motifs: one was about the campaign information, the others about Open Science, legal aspects, advantages and benefits of Open Access, Open Access publishing options as well as the Open Access research cycle.

Overall, the project was well received by the students and especially within the department libraries that not only took time out for exhibiting the created posters, flyers and informational folders but also wanted to leave the posters (except the information poster) on for longer.

The result at the end of the week: more than 90 quiz sheets were filled out and returned!

The winners were contacted and very happy to be congratulated for their win (see pictures). The main prizes were five OpenAIRE thermo bottles, 10 glasses of sweets and 20 OpenAIRE magnets. Every participant additionally won an OpenAIRE WebCam Blocker. 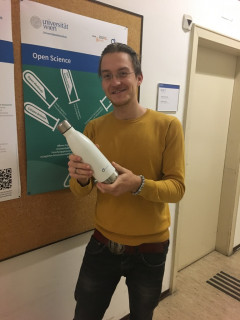 A lucky winner of the 1st prize ©Mihaela Hubert 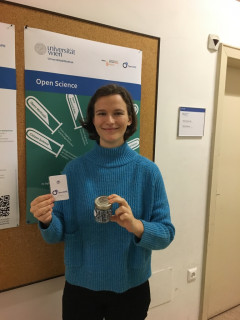 A winner of the 2nd prize ©Mihaela Hubert 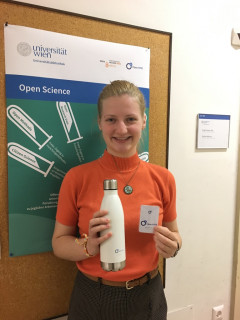 Another happy winner of the OpenAIRE thermos bottle ©Mihaela Hubert