In a 90-minute workshop at the OSFair on 22 September 2021, the projects EOSC-Pillar, EOSC Synergy, ExPaNDS, NI4OS-Europe, FAIRsFAIR and EOSC-Nordic with support of the EOSCsecretariat.eu project, discussed their progress and work on policies related to open science (OS) with the audience. The participating projects have worked together over the last two years in the 'Policy and Governance' Task Force, one of the six task forces established to support the work of the Working Groups of the former EOSC Executive Board.

The session focussed on identifying priority action areas required to achieve the FAIRness of policies. The session kicked off with an overview by Brian Matthews (ExPaNDS, STFC/UK), in which he explained the need for agreed, common and aligned policies in the transnational experiments partnering in the ExPaNDS project. This helped to illustrate the need for FAIR policies for open science. Selected findings of the contributing projects relating to this, and action points directed towards achieving FAIR policies on selected issues were then presented. Joy Davidson (FAIRsFAIR, DCC/UK) presented the most prominent issues on Data Management Plans, Michal Růžička (EOSC Synergy, Masaryk University/CZ) on persistent identifiers, Electra Sifakaki (NI4OS-Europe, Athena RC/GR) on legal aspects and Catarina Sganga (EOSC-Pillar, Scuola Superiore, Sant'Anna/IT) on intellectual property rights, after which the audience of 30 - 40 was asked to vote. 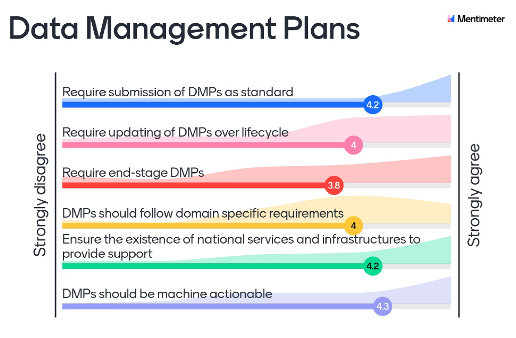 With the help of the audience, around 20 policy actions identified by the projects were discussed and put into a priority order through an on-line Mentimeter poll. The poll results relating to DMPs were close, but the strongest support relating to DMPs was for DMPs to be machine actionable. The poll was also closely-run for PIDs but insisting on the use of standard PIDs as standard for referencing entities received the most support by a narrow margin. 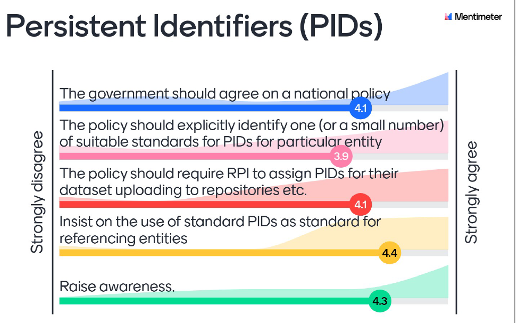 Making open science policies an integral part of national research frameworks and legislation was seen as the most needed action relating to legal aspects of OS policies, whilst for IPR the introduction of specific rules for the scientific sector in copyright law and updating of existing exceptions and limitations to create uniformity across countries were seen equally as the two most important action which should be implemented.

As you can see from the diagrams above, all of the proposed actions received support from the audience but it was informative to learn which were considered to be of the most importance.

Finally, the audience were able to post their own policy wishes which resulted in a stimulating collection of suggested actions for further work. 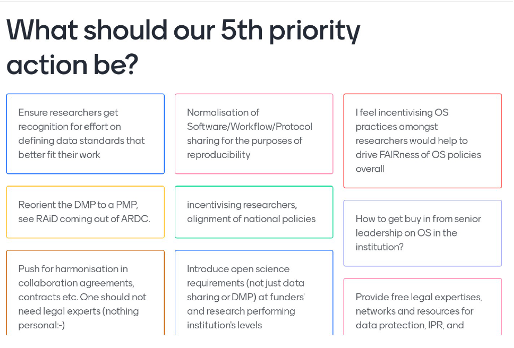 The Task Force will compile a short report using the results of the workshop, which will be communicated with the EOSC Association with the aim of highlighting priority policy actions to support the acceleration of the development of EOSC.