LIVE NOW: A joint proposal of Greek Research and Technology organizations for a National Strategy for Open Science

The joint proposal for a National Strategy for Open Science in Greece.

The biggest research and technology organizations in Greece collaborated to co-design a proposal for a National Open Science Plan. The proposed Plan forms a comprehensive set of goals, policies, commitments and actions for the adoption of Open Science in Greece and the inclusive national participation in the European Open Science Cloud (EOSC).

This joint proposal aspires to become a point of reference for the rapid adoption of the Open Science Task Force proposals as a National Strategy, but also a model for the adoption of Open Science principles by interested organisations in Greece. 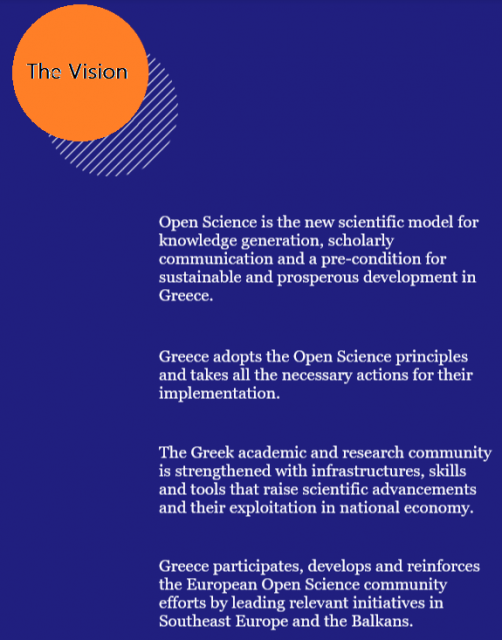 b. Research Data Management and Sharing for research data to be open by default following exemption clauses that adhere to "as open as possible as closed as necessary". Research data are preserved in appropriate repositories supporting their management, discovery and exploitation throughout the whole lifecycle.

c. Research Software Development and Management for research software produced by publicly funded activities and R&D projects to be available under a license that allows its further modification and redistribution.

d. Reinforcing the National Research Ecosystem for equipping the Greek R&D community with the necessary qualifications, digital skills, incentives and reward mechanisms for the adoption of Open Science.

e. Open Science through National Research Infrastructures and Digital Services for Research for enhancement of national RIs and service providers and for providing single access to them for the implementation of Open Science.

f. Integration or Alignment with the European Open Science and Innovation Ecosystem for linking with European Infrastructures for Open Science through the integration and application of services, standards and best practices that boost participation/ inclusivity and contribute to sustainability and enhancement of national infrastructures, services and research outputs' promotion and use.

Moreover, the Annex contains proposals for implementation actions regarding each policy. These cover a wide range of aspects from technical issues regarding best practices integration or new services development to educational and awareness raising actions for enhancing professional profiles and for cultivating a Responsible Research and Innovation scientific culture. 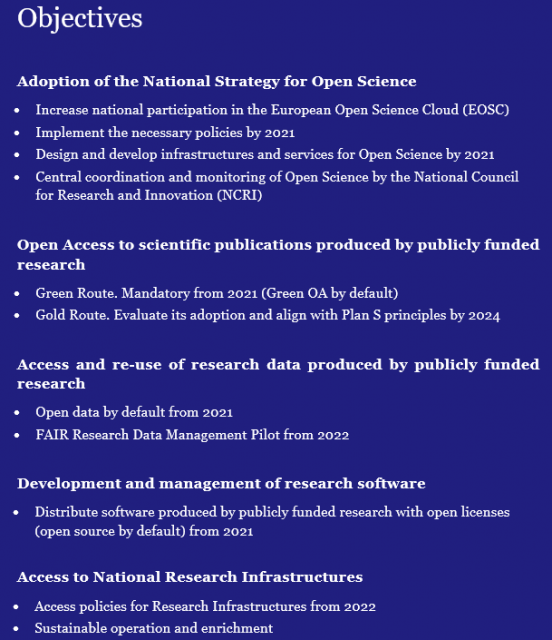 Adoption: The proposed National Open Science Plan has had positive reception by organisations-members of the informal OSTF and some of them are already taking the necessary actions for its adoption.

This joint proposal aspires to become a point of reference for the rapid adoption of the OSTF proposals as a National Strategy, but also a model for the adoption of Open Science principles by interested organisations in Greece. This joint effort is a best practice example of serving national needs and assembling R&D organizations under a common national goal.

Open Science is the new model of scientific practices, means and collaborations for producing and distributing research outputs and results with a direct scientific, economic and societal impact. Open Science is of high priority in the EU for it contributes to sustainable development, increases research results exploitation, promotes cooperation and leads to knowledge democratisation.

Greece and the European Open Science ecosystem: Greece participates and often leads the new model of Open Science through individual actions of scientists and organizations. Open Access to publications for all scientists in Europe is already offered by OpenAIRE, a digital scientific infrastructure developed under the leadership of Greek scientists, now with its official headquarters in Greece. Greek Research, Technological Development & Innovation organizations are essentially involved in all European Research Infrastructures that provide services to support Open Science, while their executives make a decisive contribution to European Union (EU) actions for the realisation of the European Open Science Cloud.

Confronting fragmentation through synergies: Although important, these actions are not enough for the substantial, economic and developmental benefit of Greece. The country's integration and harmonization with the principles and objectives of Open Science will contribute to increasing the competitiveness of national research and the industry. The first National Symposium on "Open Science in the Greek Research Ecosystem: Research Data, Procedures and Collaborations" that took place in November 2018 triggered more intensive and in-depth discussions regarding the adoption of Open Science practices in Greece both at policy and at implementation levels. Among other things, the results of the Symposium highlighted the need for all the stakeholders involved in the R&D sector to strengthen communication about Open Science and to work together for integrating Open Science in the national setting, in a coordinated fashion. It was commonly agreed that Athena Research Center (Athena RC) and NCSR Demokritos would assume a key role to move discussions one step further. 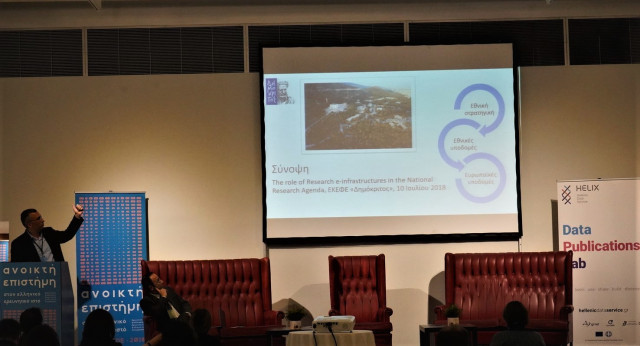 Stepping stone for central and coordinated action: Athena RC started preparatory work to scan the landscape and draft a roadmap of minimum commitments and consecutive activities that would become the base of discussions for forming a national Open Science Task Force (OSTF). The bottom-up initiative would identify challenges, coordinate actions, and jointly implement policies of national organisations. Finally, the informal Task Force was established in September 2019. It initially consisted of representatives of fourteen institutions but was quickly strengthened by new members. In the months that followed, the OSTF held regular working meetings in order to build and agree on a common Open Science framework of policies and implementation actions for Greece.

Participation in EOSC: Rapid developments within the EOSC realm pushes Greece to accelerate pace so as to accommodate proper alignment with european Open Science policies and with dependent national policies and laws. The OSTF consists of experts in the field of Open Science, thus its cooperative presence in Europe is expected to increase the dynamic that Greece displays on science and innovation matters. The OSTF has fulfilled its purpose with drafting the National Plan for Open Science and will continue to the next phase of work involving implementation activities under this successful collaborative scheme.

(*) It should be noted that there are two different groups for Open Science in Greece: one bottom-up and more informal in nature and one top-down led by the General Secretariat of Research & Technology (GSRT). The latter was formed in 2017 involving representatives from Athena RC, HEAL-Link, GRNET, EKT and University of Athens. Work described in the blogpost falls under the activities of the bottom-up Open Science Task Force.

●Drafting the proposal for a National Open Science Strategy in Greece: an inter-institutional approach

●National Plan for Open Science: towards the open consultation