Ensuring that OS becomes an emergent mode of Scholarly Communication Human capacity is instrumental in ensuring that we achieve culture change which is an important catalyst for the implementation of Open Science practices by Josianne C. Vello  & Kevin J. Ellul The OpenAIRE team has the pleasure of speaking to Kevin J. Ellul, Director of Library Services and Josianne C. Vello, Deputy Director of Library Services at the University of Malta. Read their r...

Learn more about the newly adopted OS Strategy and recent developments in the country. OpenAIRE helps you keep up with everything that's important in Open Science. by Gita Rozenberga The OpenAIRE team has the pleasure of speaking to our NOADs in Latvia, Gita Rozenberga, Chief Librarian at the Library of the University of Latvia. Read her reflections on Open Science. How does the University of Latvia support Open Science in the country? Support services are related to different asp...

The CHIST-ERA consortium has created a common funding instrument to support transnational projects. Through this instrument, the national/regional funding organisations of CHIST-ERA support and join the Horizon Europe Open Science agenda. By launching joint calls, they can support more diverse communities, who are able to tackle the most challenging and novel Open Science topics.This call concerns the following topic:Open & Re-usable Research Data & Software (ORD) The challenges and prom...

OpenAIRE has an extensive network of OS experts who can be contacted and consulted anytime OpenAIRE helps us significantly with its resources, guides, and training materials which help us in training and promotion activities on the national level. by Bojan Macan & Jadranka Stojanovski The OpenAIRE team has the pleasure of speaking to our NOADs in Croatia, Bojan Macan, Head of the Centre for Scientific Information at Rudjer Boskovic Institute and Jadranka Stojano...

OpenAIRE and libraries in Greece and Cyprus: For many years now, OpenAIRE NOADs in Greece (ATHENA RC and HEAL-Link) and Cyprus (University of Cyprus Library) have run joint webinars and workshops to raise awareness and train their national academic and research communities on Open Science practices. Most importantly, they have been supporting researchers in complying with Open Science requirements in the context of the EU Framework Programmes for Science, Technology and Innovation (FP7, Horizon2020, Horizon Europe).

OpenAIRE NOADs are professionals in library and information science who work in academic and research environments and assume the role of Open Science liaisons who support the alignment of national and European research policies and ecosystems. 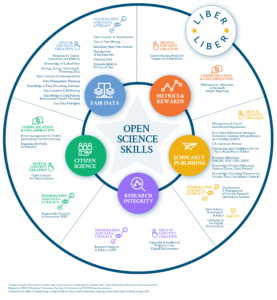 Expanding collaborations: Digitalisation of science has posed new demands in the way research is conducted, shared and supported throughout a project lifecycle. The need for quality of research results and their reproducibility is expressed by the transition to the new standard of Open Science. Today, libraries seize this opportunity to upskill/reskill and support their library users to become digital literate and competent in the European Research Area (ERA) and Digital Single Market (DSM).

In Spring 2022, the Greek and Cypriot NOADs converged with the Association of Greek Librarians and Information Scientists - A.G.L.I.S. and the Cyprus Association of Librarians – Information Scientists - CALIS to address the evolution of Librarianship in the Open Science realm. The collaboration is based on the organisation of events that connect professionals and staff of public, school, academic and research libraries in Greece and Cyprus with OpenAIRE NOADs to exchange information and discuss recent trends. Furthermore, this provides a great opportunity to record the needs of the members of the two associations and the naional Open Science communities at large.

Starting off: The first webinar welcomed 240 library professionals and staff in talks and discussions that provided a good overview of the changing role of librarians in the digital age. The focus of the event was to highlight:

The agenda of the event was as follows:

Libraries in Open Science: In this first event, participants were navigated through the latest policies of the European Commission and the UNESCO Recommendations on Open Science. Among the things highlighted were the importance of quality data and their economy to increase living conditions through innovation and citizens' participation and trust in science. From that, it became apparent that Open Science is for everyone and can be applied by all libraries, not only academic, and that training is needed to successfully reach this systemic change. The presenters urged library professionals to upskill/reskill in order to in turn train and support their users in the application of best practices on Open Science. Librarians are the ones who should also upgrade or develop new services in their institutions that follow the FAIR principles to ensure harmonization of practices, policy compliance and ease scientific information exchange. The value of Open Science was made clear to everyone, who agreed that the support of institutions and funders is equally needed for Open Science to progress at national and institutional levels. New incentives and alternative rewarding mechanisms for the evaluation and promotion of researchers according to best practices should become a priority.

Since 2009 the National Open Access Desk in Cyprus, has participated in European projects to support the promotion of European and national policies related to Open Science. There are collaborations with public libraries for the promotion of Citizen Science initiatives and funding mechanisms such as "Cyprus University of Technology Open Access Author Fund" .

The libraries in Cyprus participate in the Consortium and Cyprus Association of Librarians – Information Scientists - CALIS for Open Science, supervised by the Deputy Ministry of Research, Innovation, and Digital Policy of Cyprus.

Coming up: Both communities of library professionals and information scientists in Greece and Cyprus remain active and embrace the advancements in the library science field. They will meet again in the Autumn to continue discussions about their daily Open Science activities and experiences. This collaboration is expected to flourish and provide exposure to new information and skills which is a prerequisite for the dynamic response of the libraries to the digitalization on science and society.

Identifying the research products (research literature, data, software, and other types of research products) that are funded by research projects and funders is key to realizing research impact or research trend analysis tools. The OpenAIRE Research Graph (https://graph.openaire.eu) builds and openly publishes one of the largest dataset of product-project-funder links by harvesting metadata from data sources that comply with the OpenAIRE Guidelines (e.g., repositories, publishers); or by full-t...

The growth of citizen science (CS) is not uniform, even within Europe. While the CS concept is thriving in Western Europe, it is only starting to be recognized in post-socialist countries of Central and Eastern Europe. A comparison of Slovakia with its neighboring countries, the Czech Republic, Poland, Hungary and Ukraine (as neighboring post-socialist European countries) and Austria (as a nearby example of good practice regarding CS), shows some possible explanations of the lack of awareness of...

Announcing the new "National Policy of the Republic of Cyprus for Open Science Practices"   Reported by Sylvia Koukounidou After the first National Policy for Open Access in Cyprus, approved by the Council of Ministers of the Republic of Cyprus on the 25th of February 2016, the time has come for a revision in order to follow the rapidly changing research ecosystem and fulfil all the requirements of the new Open Science era. Thus, after a long period of discussions and the involvement o...