📖 NOADship in Greece and Cyprus: Athena Research and Innovation Center acts as the National Open Access Desk (NOAD) for Greece, a position evolving stakeholders’ engagement and supporting research activities, currently run jointly with the Hellenic Academic Libraries Link (HEAL-Link) as third partner to the OpenAIRE Advance project. NOADship in Cyprus falls under the responsibility and management of the University of Cyprus Library.

💡 The idea: Recognising the need of a disruptive move to spread awareness nationally and following the paradigm of successful efforts, like the ones of the Turkish and the Portuguese NOADs, it became apparent that dissemination and training activities could potentially have greater impact if performed in the national language. Thus, in September 2018, a series of OpenAIRE webinars in Greek language were initiated by Athena RC in collaboration with the University of Cyprus Library and HEAL-Link.

🎀 Cutting the ribbon: First in the series was an introductory to Open Access (OA) webinar targeting researchers and research administrators with the goal of informing about Open Access to publications in Horizon2020, as well as about the national developments regarding OA.

The webinar took place on Thursday, 27 September and welcomed attendees coming from the library and research sectors.

The webinar started with Natasa Ioannou (University of Cyprus Library) informing about EU’s OA policies  and explaining the specific requirements and mandates which have been set for that reason (e.g. Horizon2020, Horizon Europe). She then briefly touched upon actions which should be embedded in the research workflow of researchers to make their research open and publish in OA. Natasa concluded by stating the importance of OA to research, to the economy and the community.

The second part of the webinar was devoted to OpenAIRE, its role in the EU and nationally, focusing mainly on the National Open Access Desks contribution and support provided to researchers. Elli Papadopoulou (Athena Research and Innovation Center in Greece) stressed the responsibility that OpenAIRE has in linking information to contextualise research activities and outputs into forming research entities. Since its establishment, OpenAIRE has been informing the EU about OA trends and achievements falling under publicly funded research of the given Framework Programmes (FP7, FP9, Horizon2020 etc). For that, both technical and supporting services were developed, to achieve EU requirements such as repositories interoperability and visibility of research outputs, as well as to assist researchers activities through new tools and a dedicated helpdesk. Lastly, the current state of OA repositories in Greece and Cyprus was mentioned and OpenAIRE compliant paradigms were reported.

🔎 The feedback: After the conclusion of the webinar, a feedback form was shared with the participants. Out of the 14 responses received, the results show that the content of the presentation satisfied the needs of the participants (Pie 1) by enriching their knowledge with new information (Pie 2). 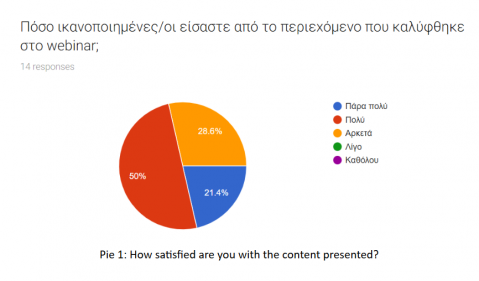 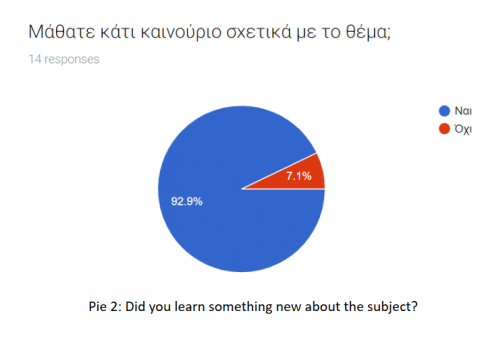 In addition, all of the respondents would be happy to participate in another OpenAIRE webinar (Pie 3) for which they had the opportunity to suggest improvements/additions/modifications of any sorts, currently being examined by the organisers. 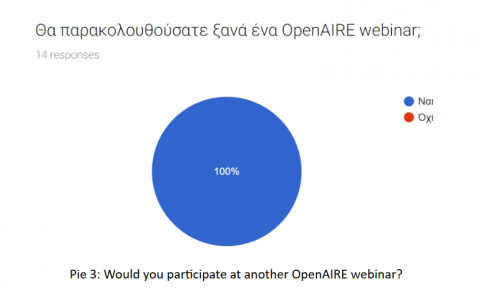 🔜 What is next? The first webinar went very well, and there has already been high demand on behalf of participants for the next webinar. To provide further information and practical tools on  EU requirements in Horizon2020, the team is planning to organise a webinar about research data to take place in November 2018. Stay tuned!

On behalf of Greek and Cypriot NOAD