Over half a million articles are now available in the Library of Science, the largest open access scientific collection in Poland. An online event was organized to mark this achievement by the Open Science Platform based at the Interdisciplinary Centre for Mathematical and Computational Modelling (University of Warsaw), responsible also for the OpenAIRE National Open Access Desk in Poland.

The Library of Science is available at: https://bibliotekanauki.pl/

The Library of Science is a critical element of the Polish open science landscape. It makes full texts of articles published in Polish scientific journals and Polish scientific books available, together with rich metadata. It is free to use for everyone, without any technical barriers. Over 40% of resources are published using Creative Commons licenses that enable the free distribution and reuse of the publications. The new version of the Library of Science was launched last year. Over the recent 12 months, the total number of downloads exceeded 6,5 million.

"Thanks to the Library of Science, open access to scientific publications is implemented in Poland in a way that may inspire publishers, editors, and institutions developing open access infrastructure from other countries. Gathering and making available a large part of scientific journals and books published in our country on one state-of-the-art platform opens up new possibilities for analyzing and using this content, also by machines. We are convinced that the Library of Science will be an important element of the evolving open science ecosystem that will connect publications, research data, and other digital research objects".

Gathering over 500 000 articles is a result of the long-term cooperation of the Open Science Platform with Polish scientific publishers and indexing databases.

The webinar celebrating the milestone for the Library of Science was held on 15 September 2022. It gathered representatives of scientific publishers that make their publications available in the Library of Science. They presented open access publishing models adopted by six organizations:

The speakers underlined the benefits of adopting open access policies and explained the conditions under which they publish journals and monographs, particularly using Creative Commons licenses. Much attention was given to the funding models, organizational resources, and institutional context of the publishing activities. Moreover, the speakers referred to the cooperation with the Library of Science and indexing databases, stressing the importance of the wide dissemination of scholarly outputs.

"Scientific journals in the Library of Science benefit from economies of scale. The website collects over 1,600 journals and 1,200 books in one place and makes them available using internationally-recognized data exchange standards. The resources are visible to search engines and other websites, including scientific aggregators. As a result, there is a direct impact on the journal's visibility, citations, and, consequently, its capacity to attract readers and authors."

Krzysztof Siewicz, Coordinator of the Library of Science

The platform aims to increase the visibility and availability of Polish scientific publications, enabling publishers to reach new communities of readers and authors. The cooperation with the Library of Science is free of charge and non-exclusive. As such, it does not restrict publishers' possibilities to make their content available elsewhere.

The new version of the Library of Science was launched in 2021. Read more in the blog post below. 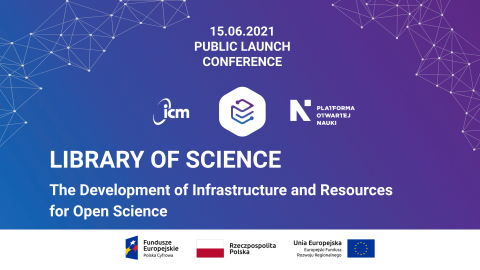 The launch of the new Library of Science website in Poland

Over 320 people from Poland and around the world participated in the launch event of the Library of Science organized on June 15, 2021. The new website was inaugurated as part of the 'Platform of Polish Scientific Publications' project by the Interdisciplinary Centre for Mathematical and Computational Modelling, University of Warsaw (ICM UW).  The Library of Science - the new version of the platform An introductory speech was given by Marek Michalewicz, director of ICM UW, who presented the...
https://www.openaire.eu/blogs/the-launch-of-the-new-library-of-science
Tags:
Open Access journals Open Access open access books publishers
×
Stay Informed

The launch of the new Library of Science website in Poland