Background: In the framework of the NI4OS-Europe project, ATHENA Research and Innovation Center (ATHENA) developed tools that respond to emerging Open and FAIR Research Data Management (RDM) demands of researchers and provide a first set of clarity for EOSC resource providers' compliance with the Rules of Participation (RoP).

NI4OS-Europe is the European project that supports the development and inclusion of National Open Science Cloud Initiatives (NOSCIs) in 15 south-east european member states and associated countries in the overall scheme of EOSC governance, as well as the onboarding of national infrastructures and services to the European Open Science Cloud (EOSC).

Why legal orientation: The landscape review of available Open Science and RDM tools unraveled that legal issues in RDM currently satisfy, among other things, re-usability on the level of assigning proper licenses to research outputs. Though important, these approaches still lack addressing the complexity pertaining to legal interoperability, e.g. in scenarios where certain Intellectual Property Rights (IPR), such as copyright, need to be examined for derivative works to be realized. In addition, observing the trends around FAIR implementation showed that the community mainly focuses on technical aspects and, thus, would greatly benefit from the development of tools that both accommodate and increase attention to additional aspects across the RDM lifecycle. Furthermore, given the NI4OS-Europe scope and objectives, it felt natural that the tools more directly facilitate EOSC specific aims and operations, such as those covered by the RoP. 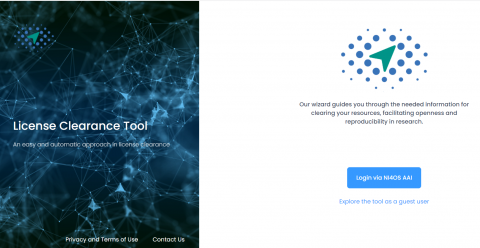 LCT for researchers: License Clearance Tool - LCT is an open-source tool that facilitates and automates the clearance of research outputs' copyright before they are released under an open licence and/or stored at a publicly and trusted FAIR-enabling repository.

LCT is designed to support researchers to publish in FAIR/open modes and data managers to compete against untidy, messy and not well-defined data ensuring the maximal re-use of derivative works. Moreover, LCT addresses many types of data, media works, software and even hardware.

Researchers are guided through six simple steps in LCT, where they enter information about both the licenses of products / parts of products that they are re-using and licenses that they wish their derivative work to be released under. Based on license compatibility tests that run in the back-end, the tool produces reports suggesting a number of possible standard licenses that can be applied to the derivative work.

RoLECT for EOSC resource providers: EOSC RoP Legal & Ethics Compliance - RoLECT, is the first web application that offers scientific resource providers' with an intuitive self-assessment against EOSC RoP. RoLECT prepares potential providers for their compliance with legal and ethical measures as required in the EOSC RoP, which they have to meet as 'EOSC providers'.

According to the EOSC RoP working group, "The Rules of Participation shall embrace the principles of openness, transparency and inclusiveness. They shall guarantee an open, secure and cost-effective federated EOSC with services of documented quality", while leaving room for differentiating the rules to apply to different EOSC users.

Since the EOSC RoPs are yet to be adopted, monitored and enforced by the EOSC Association, it is important to consider RoLECT as facilitator and contributor to the increasing maturity of various resource provisions rather than as an enforcing tool.

The tool integrates a number of existing modeled procedures, under a structured flow providing logic steps for testing a potential EOSC service/dataset against the current RoP. Interested providers enter information following RoLECT guiding steps. Information varies from descriptive characteristics of the resource, such as resource name and URL, to information that enables others to know how this resource can be re-used, such as relevant to the license under which it is provided (e.g. open license and licenses compatibility). Moreover, the tool expands to issues relevant to ethical and the handling of personal data according to GDPR and/or other Public Sector Information rules and provisions. 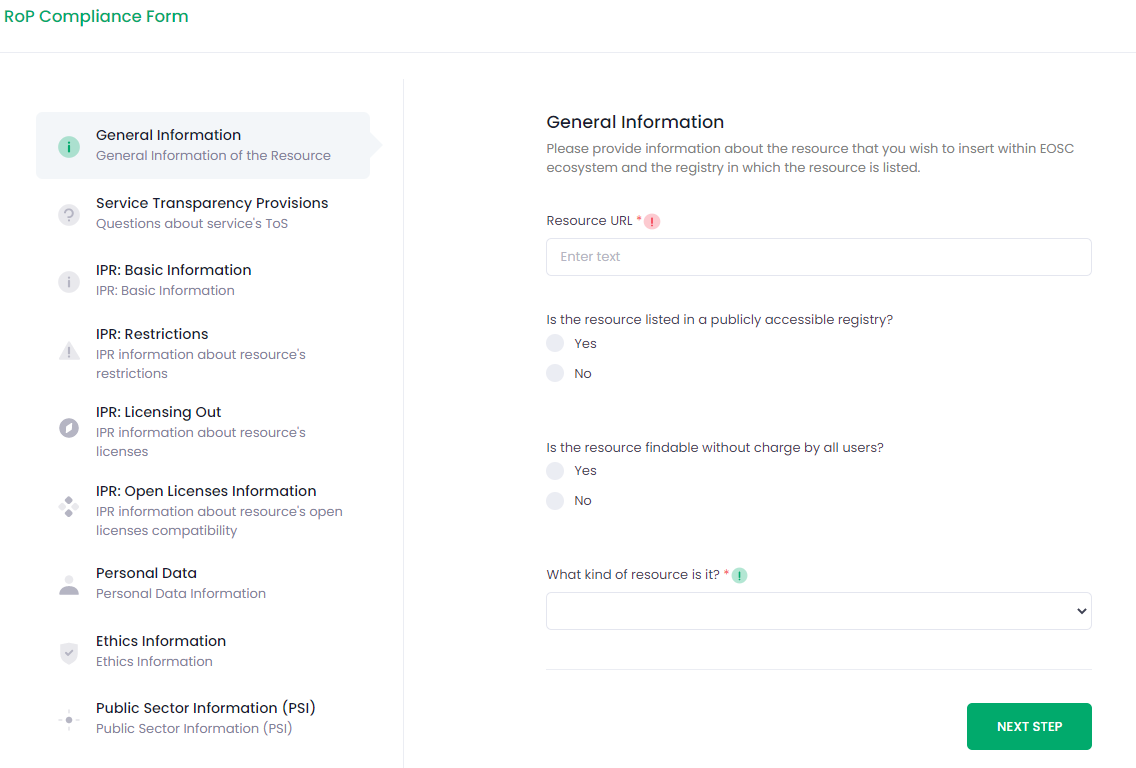 Future plans: The two tools are still under development and run on Beta. New features are currently being integrated and next versions are planned for release in Summer 2021. The development team is now collecting feedback from use cases of NI4OS-Europe partners.