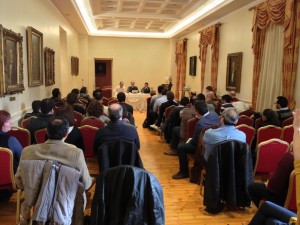 The Institute for the Management of Information Systems (IMIS) of "Athena" Research Center ("Athena" RC), and the Greek Free/Open Source Software Society (GFOSS), organized for the Greek Open Data Day for 2013. Through this event, the open data community in Greece joined volunteers in 109 cities across the world, in celebration of the global Open Data Day. The International Open Data Hackathon is a gathering of citizens in cities around the world to write applications, liberate data, create visualizations and publish analyses using open public data to show support for and encourage the adoption open data policies by the world's local, regional and national governments.

The Greek Open Data Day followed the footsteps of yearly open data days and hackathons co-organized by IMIS and GFOSS since 2010. This year, more than 160 members of the open data community were present, marking a milestone for open data in Greece. The participation, interest and efforts of all volunteers were an unprecedented success!

Prof. Yannis Ioannidis, President of "Athena" RC, welcomed all participants and reaffirmed the dedication of Athena RC towards supporting open data, both through EU-leading research activities and volunteer work by Athena researchers. Among others, he highlighted the disruptive gains from geodata.gov.gr, the open data portal developed by IMIS and presented the ongoing work of "Athena" RC for open data infrastructures, in the context of OpenAIRE, CLARIN, GeoKnow, and multiple other research projects.

The General Secretary of Information Systems, Haris Theoharis, was also present during the event, highlighting the importance of open data for the transparency and monitoring of the tax administration. Further, he informed all participants to expect even more open financial data provided by the Greek public sector in the near future, and invited all volunteers to help the public administration through knowledge transfer and the development of value added services.

A number of short presentations then took place, where researchers and open data practitioners presented open data technologies, tools, and initiatives. Highlights include the announcement for the beta operation of datahub.gr, an open data portal developed by IMIS with the goal to support the public administration in open data publishing. Further, the GeoKnow and DIACHRON EU research projects presented their planned work towards open geospatial data and provenance for the Data Web, and their contribution in EU's data economy. Finally, publispending.gr was presented, a web site analyzing and visualizing open public spending data, highlighting the benefits of open data for transparency. 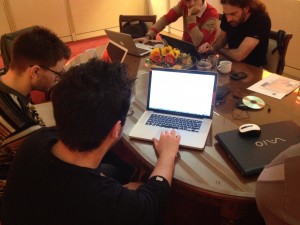 The Greek Open Data Day ended with a debate, which had the following question: "Open or Closed Data?" The aim was to expose the intricacies and complexities involved when publishing open data and empower participants with an arsenal of arguments in order to knowledgably promote open data. Several important issues where raised, involving the true economical benefits of open data, potential dangers for privacy, application in research activities, transparent public services, etc. For the record, open data won, but everyone acknowledged that much work needs to be done on educating the public and private sector.