OpenAIRE seismic data use case of citizen science in schools

Around 22.000 earthquakes are happening every year globally, or if you prefer, around 55 per day, but we can feel only few, based on our location (distance from epicenter), status (if we are on the go moving or still), magnitude and type of the earthquake. With all the available technologies, it is easier to track and measure seismic waves even from kilometers away.

Since 2015, Ellinogermaniki Agogi has created the School Seismograph Network with the cooperation of the National Observatory of Athens. Massive number of datasets are collected from installations of Raspberry Pi seismographs at schools’ premises exposing students to these delicate instruments, the field of seismology and the uniqueness of open research data.

Why does it matter?

The network extends from the Azores (North Atlantic) to Israel covering the extremely earthquake-prone area of ​​the Eastern Mediterranean. Seismographers have also been placed on islands with volcanic activity such as the Azores, Sicily, Santorini providing researchers with a plethora of data from the various seismic stations. Apart from the scientific interest to monitor earthquakes, it is important to understand that earthquakes can also affect the global economy. Only in China, the direct economic loss from earthquakes from 2009 to 2019, is more than 200 Billion Yuan (~25 Billion euros). Maybe more than ever, it is important to monitor earthquakes and prevent mass disasters and loss of people with early warning systems. Just imagine if early warning systems existed in many cases along public buildings and could alert all citizens to protect it could save lives. That raises the question, how could citizens or public organizations like schools collect data for seismic activity and assist scientists? Could that data be collected, stored and analysed to enable us build applications for society’s good?

The data journey from creation, collection, analysis, and exploitation

OpenAIRE responded to the need for a more open and organized data management and performed a series of actions. Drafted a suggestion on how national and European infrastructures could potentially assist with the data storage and availability, following FAIR principles and guidelines. A second step was to support workshops and webinars on citizen science and the seismic data, inside and outside of schools. 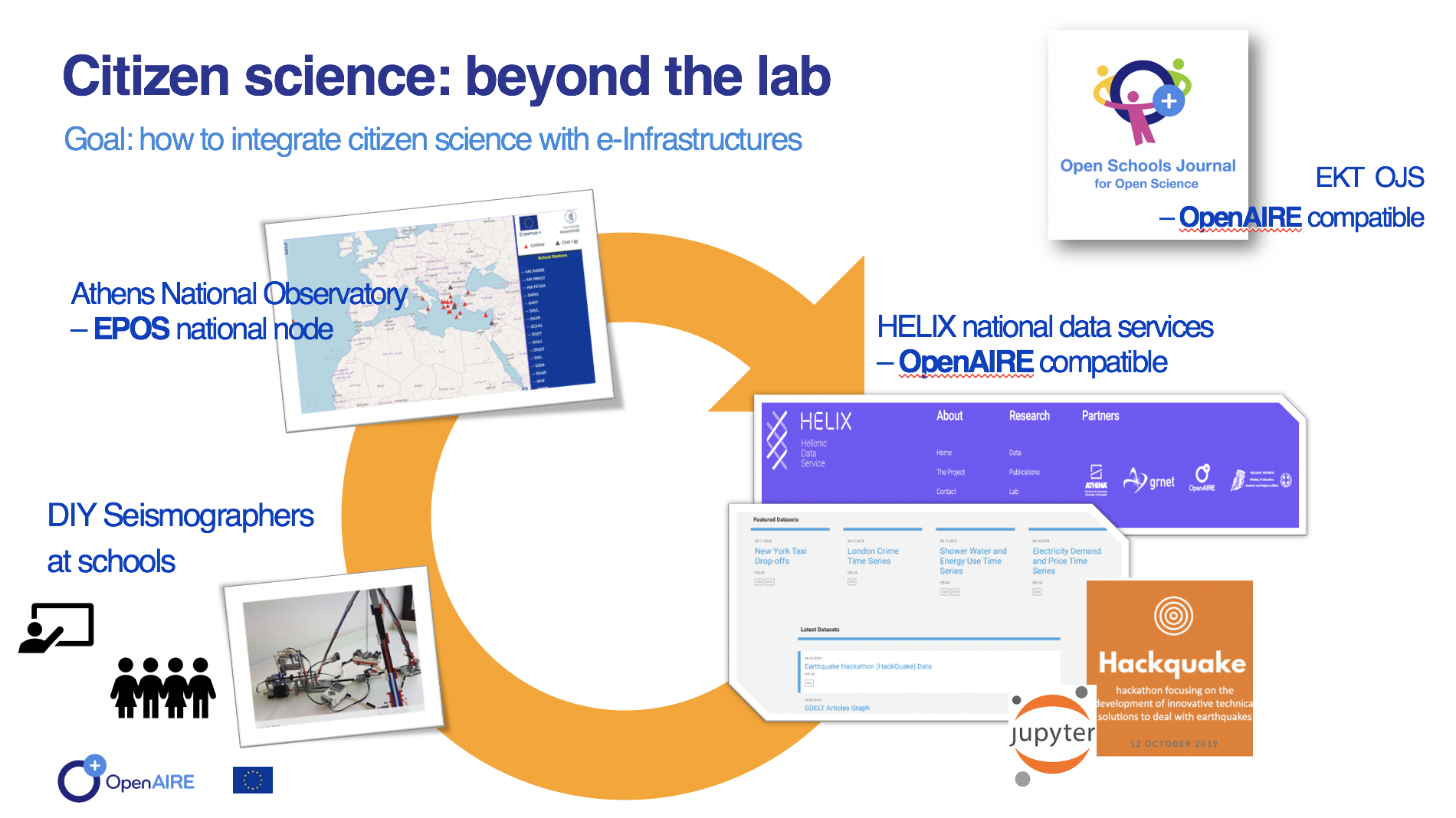 HELIX is a national (Greek) horizontal e-Infrastructure for data-intensive research, handling the data management, analysis, sharing, and reuse, fulfilling the needs of Greek scientists, researchers, and innovators in a cross-disciplinary, scalable, and low-cost manner. In this case, HELIX provides its services by supporting seismic data sharing and experimentation, enabling students and their teachers to run python scripts on seismic data and to develop an early warning application that its value could be tremendous in the case of an earthquake.  Therefore, OpenAIRE partner, Ellinogermaniki Agogi, organized a Hackquake in October 2019, where Helix provided seismic data to teachers and students, derived from the School Seismograph Network, with the aim of developing an app that would work as an Early Warning System in the event of an earthquake, which could potentially have a major impact on the society, and it would stand as a representative example of the benefits of citizen science towards the society.

"Scientific Research has to be introduced in our schools ... Such synergies between schools and research institutions provide a great example for others to follow ... In this way we can change the current education paradigm towards a vision of excellence"

A contest under the topic ''Build your Own Seismometer" was organized by Ellinogermaniki Agogi in collaboration with the National Observatory of Athens, in the framework of the Open Schools for Open Societies and supported by OpenAIRE Advance project. The initiative exposed to the public and decision makers, the importance of such citizen science activities in schools. The national contest was welcomed by students and teachers that raised the number of the schools participation to more than 100 across Greece. The recognition from former President of Hellenic Republic, Prof. Prokopios Pavlopoulos during the award ceremony, was a honored recognition of the vision towards open schools within an open science ecosystem.