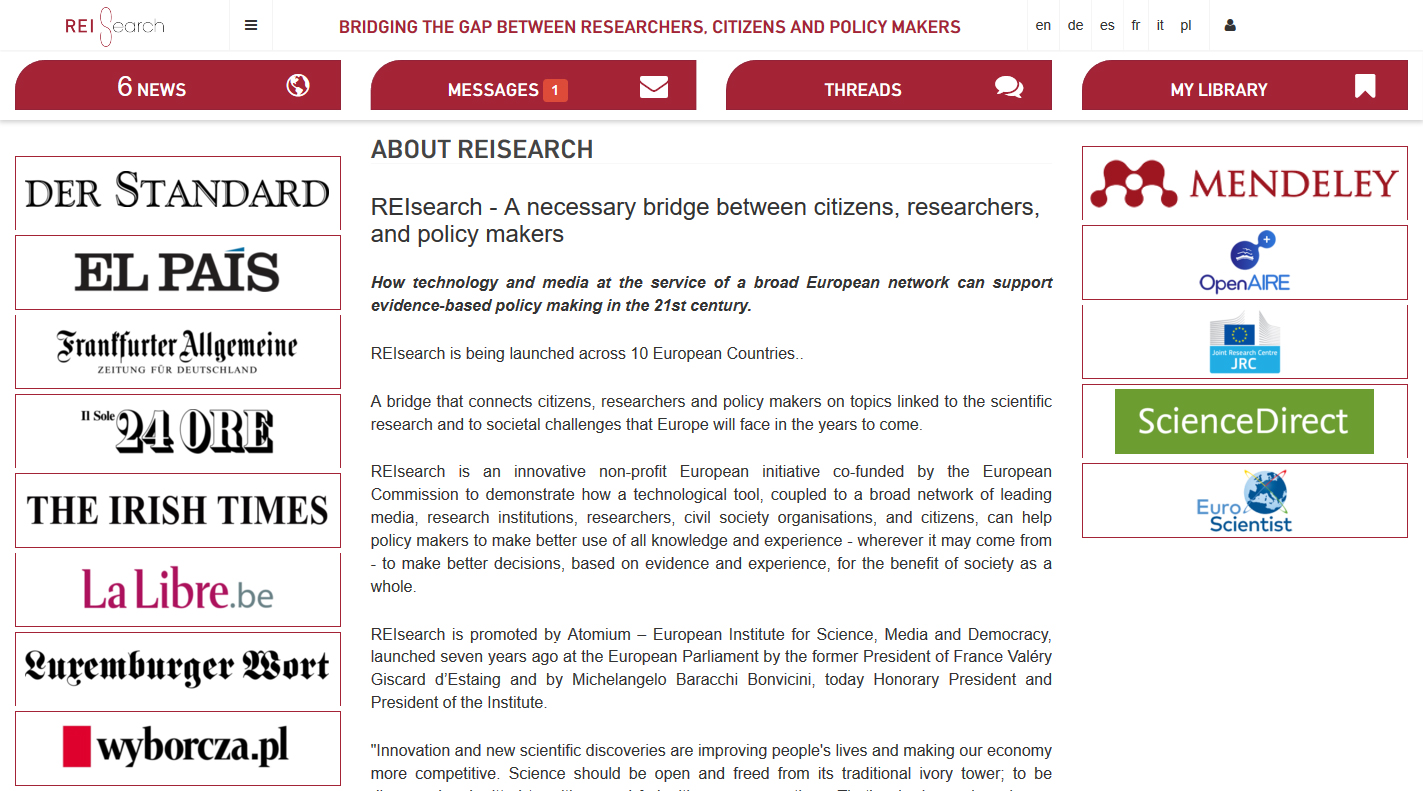 REIsearch - a bridge that connects citizens, researchers and policy makers on topics linked to the scientific research and to societal challenges that Europe will face in the years to come -  launches across 12 European Countries.

REIsearch is an innovative non-profit European initiative co-funded by the European Commission to demonstrate how a technological tool, coupled to a broad network of leading media, research institutions, researchers, civil society organisations, and citizens, can help policy makers to make better use of all knowledge and experience - wherever it may come from - to make better decisions, based on evidence and experience, for the benefit of society as a whole.

REIsearch is currently focusing on Chronic Diseases to engage the experience and concerns of the citizens in the debate, to bring the expertise and knowledge of researchers to the attention of policymakers and to allow policymakers to make use of this valuable experience and expertise on a European level to promote more evidence-based policymaking.

REIsearch is promoted by Atomium – European Institute for Science, Media and Democracy, launched seven years ago at the European Parliament by the former President of France Valéry Giscard d’Estaing and by Michelangelo Baracchi Bonvicini, today Honorary President and President of the Institute.

"Innovation and new scientific discoveries are improving people's lives and making our economy more competitive. Science should be open and freed from its traditional ivory tower; to be discussed, submitted to critique and fed with new perspectives,” say Valéry Giscard d’Estaing and Michelangelo Baracchi Bonvicini.

OpenAIRE, Mendeley, the European Commission’s Joint Research Centre and Elsevier are facilitating the engagement of researchers.

Some of the most important European organisations operating in the Chronic Disease sector (European Respiratory Society, STOA, International Diabetes Federation Europe, Karolinska Institutet, LERU, ALLEA, CPME, EuroScience), together with relevant Directorates-General of the European Commission, have cooperated to write questions that for the next five weeks will be addressed to both researchers and the public at large. The answers collected will allow policy makers across Europe to obtain useful and significant insight, expertise, and data on key issues in chronic disease management and prevention.

Over the next 5 weeks, REIsearch will introduce a set of very diverse issues related to chronic diseases: from big data to social innovation, from E-health to the connection between wealth and health, and many more will be introduced on the REIsearch platform and through social media channels. The results of this campaign will be presented to the European Parliament and European Commission at the end of April.

Mr Xavier Prats Monné, Director General of the Directorate General for Health and Food Safety of the European Commission says: "Only with a renewed dialogue between researchers, citizens and policy-makers will Europe be able to meet its increasingly complex challenges. And cooperation across sectors and countries is indeed the best trigger for creative thinking, and the key incentive for innovative solutions to complex problems. REIsearch provides the right kind of genuine push towards stronger evidence-based policy making, more informed citizens, and better science - this is why I so eagerly look forward to the results of the first REIsearch initiative on Chronic Diseases".

REIsearch will expand into new topic areas of interest to policy, science and society as it develops. And in the coming years additional functionalities will be available, allowing citizens to directly interact with experienced researchers at both national and European level.
Join the discussion and your opinions will contribute to creating the policy of the coming years!