The EU NanoSafety Cluster as Linked Data visualized with Scholia

On the OpenAIRE blog, an article written by  Egon Willighagen, Najko Jahn and Finn Årup Nielsen describes how the information from the EU NanoSafety Cluster has been visualised as linked open data, using the Scholia Platform.  The OpenAIRE REST API has been used to obtain links between items for projects and items for journal articles indexed in PubMed.

The EU NanoSafety Cluster, which is a cluster of European Commission-funded projects in the funding programs FP6 (2002–2006), FP7 (2007–2013), and Horizon 2020 aka H2020 (2014–2020) framework programme aims at harmonizing the research done in these projects. The cluster coordinates work done by the NanoSafety Cluster projects to study and establish the safety of nanomaterials.

Scholia was introduced recently as a graphical interface around Wikidata, combining information from multiple entries in the database, with a focus on scholarly literature [8]. Scholia has since been used to provide overviews of literature, e.g. literature about the Zika virus [9]. Scholia organizes views on data from Wikidata into so-called aspects. Existing aspects includework, venue, author, topic, and organization among a number of others.

During the hackathon (see also Wikidata:WikiProject Research projects), a number of Wikidata items were created for projects participating in the NSC, using grant information from the EC CORDIS database. A list of FP7 and H2020 projects was retrieved from the NSC website and merged with data from CORDIS, a central online databases about projects funded by the European Commission. OpenRefine’s WIkidata  reconciliation tool (www.wikidata.org/wiki/Wikidata:Tools/OpenRefine) was used to upload data about the NSC projects to Wikidata in case they were not available, yet.

Furthermore, the OpenAIRE REST API (api.openaire.eu) was used to obtain links between items for projects and items for journal articles indexed in PubMed. The relationships between grants and publications were represented according to the QuickStatement syntax (see www.wikidata.org/wiki/Help:QuickStatement), a popular tool for uploading data to Wikidata. This combination allows Scholia to present a timeline of NSC projects and research outputs. 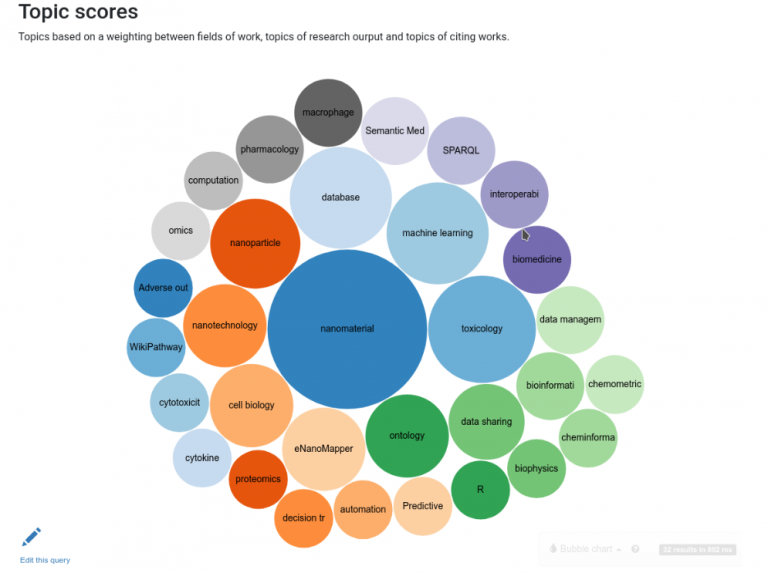