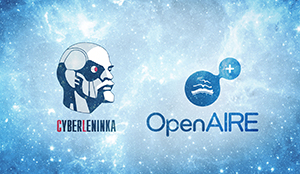 Russia tops the list! According to updated data storage, Russia entered the top five European countries by the number of articles published in open access.

About a month ago, the scientific open access library CyberLeninka provided OpenAIRE with their data to about half a million articles stored in its database. According to updated data storage, Russia entered the top five European countries by the number of articles published in open access.

OpenAIRE indexed a total of 514,571 items available at that time in the library CyberLeninka. According to the updated statistics, the five European countries with the largest number of published articles in open access are: the Netherlands (654,000 entries), Spain (604), Great Britain (585), Germany (580) and Russia (525).

“For us it is an indicator of what can be achieved even without state regulation in the field of open access. With the participation of the state, and more systematic promotion of the ideas of open science, Russia will be at the front of domestic science in the public domain, which will increase its transparency. As a consequence we can do the following: reduce duplicating research funding, and avoid double cost. To carry out research and access to its results, we need to create a competitive environment for the development of services for scientific data. There will be public examination of the quality of science, on which can be formed a public database of experts needed for expert analysis of new research projects. The increased coverage of audience of research publications (primarily due to experts from related scientific fields) will have a positive impact on the dissemination of knowledge, particularly in the development of interdisciplinary research.”

CyberLeninka is a scientific library, that contains articles published in Russian journals which are publicly available. At this point the library holds more than 564 thousand articles. The main challenges facing the library are: the popularization of science and research activities, public monitoring of quality of scientific publications, the development of interdisciplinary research, institute of modern scientific review and increase the citation of Russian science.